Do you remember the iconic Sprinter statue that was on top of Centrepoint Tower during the Sydney 2000 Olympic Games?

If you’ve driven along the New M4 recently you may have noticed its new home near Sydney Olympic Park. It’s part of the M4 East Legacy project to increase open and public spaces for local communities.

The sprinter sculpture was designed by artist Dominique Sutton and commissioned for the 2000 Sydney Olympic Games. The sculpture was part of a set of three sculptures located on top of Centre Point Tower. The other two sculptures were relocated to Canberra after the Games, however the Sprinter found a temporary home in Sydney Olympic Park. The sculpture is 16 meters high and weighs more than 8 tonnes. Light Culture chose the FLC200-CC series for its precision optics and excellent colour mixing. The RGBW multichip of the FLC200 series mixes colour before exiting the luminaire, creating a perfect and even blend of colours on the sculpture.

The Neon Classic RGBW LED strip was chosen for its individual Red Green Blue and White chips, ensuring a true white can be produced to match the FLC200-CC.

There were a few challenges during the process of installation:

Mounting strips to the sculpture without having visible mounting accessories, the desire was to see the lighting effect without the light fittings.

Maintaining the artist’s original design intent of the sculpture as it is a piece of art, therefore it was important that the strip lighting didn’t take away the sculpture’s original form.

The sculpture was installed on top of a steep hill, with minimal flat surfaces around it. This made it very challenging to find suitable pole positions to mount the WE-EF FLC200 projectors onto all sides of the sculpture, including the face. To overcome this, custom hinged poles were designed that can bend and swing, so they can be easily reached out and maintained.

Installation of LED strips was another challenge, as the sculpture needed to be taken apart in order to be transported from its working site to its final resting point.

The sculpture is now a piece of art that can change day-to-day to represent any special day on the calendar. We recently saw it lit up in blue for the third State of Origin rugby league game to show support for the local NSW Blues team.

Multiple colour scenes have been created for other events that remain to be seen by the public. 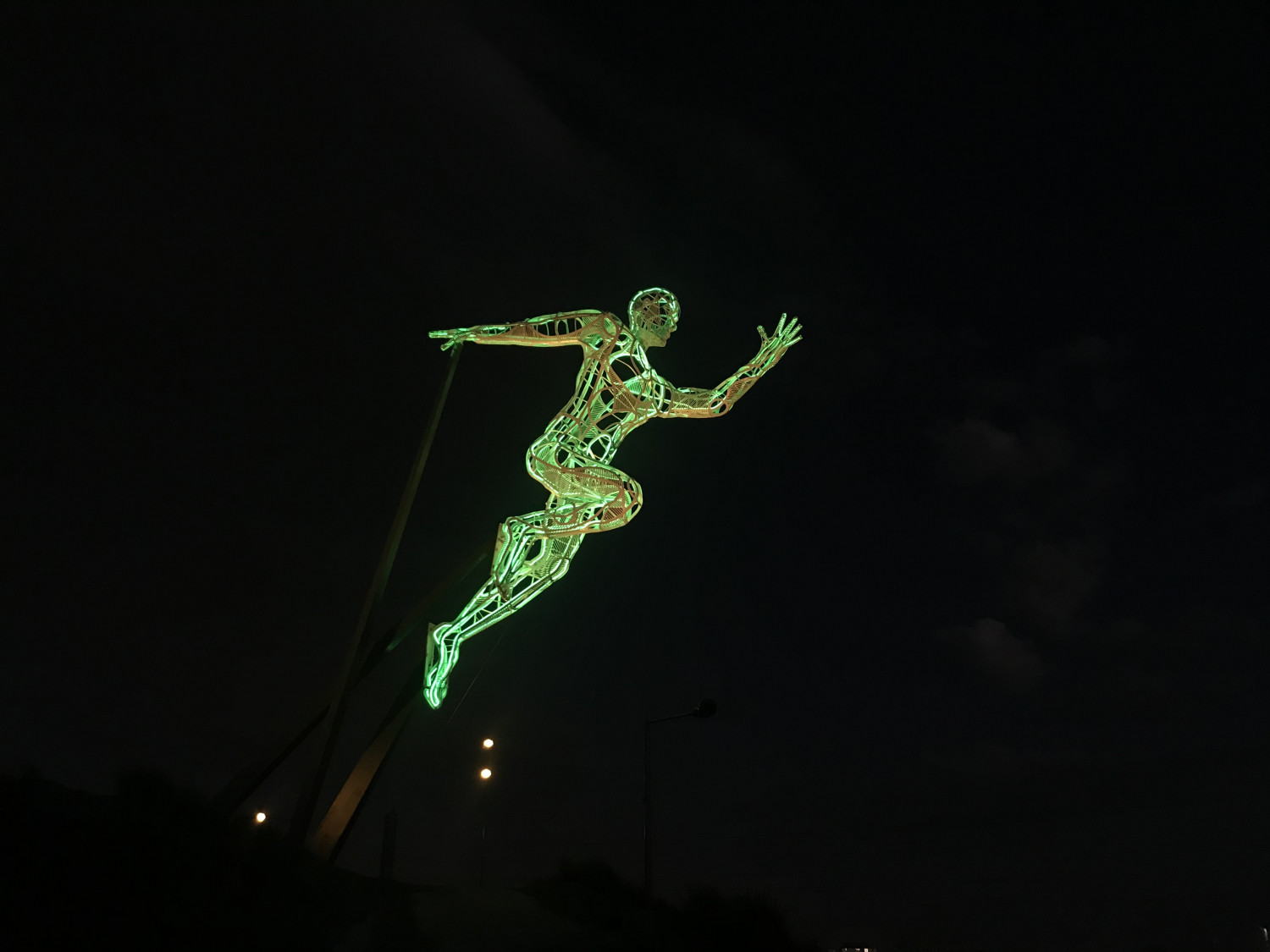 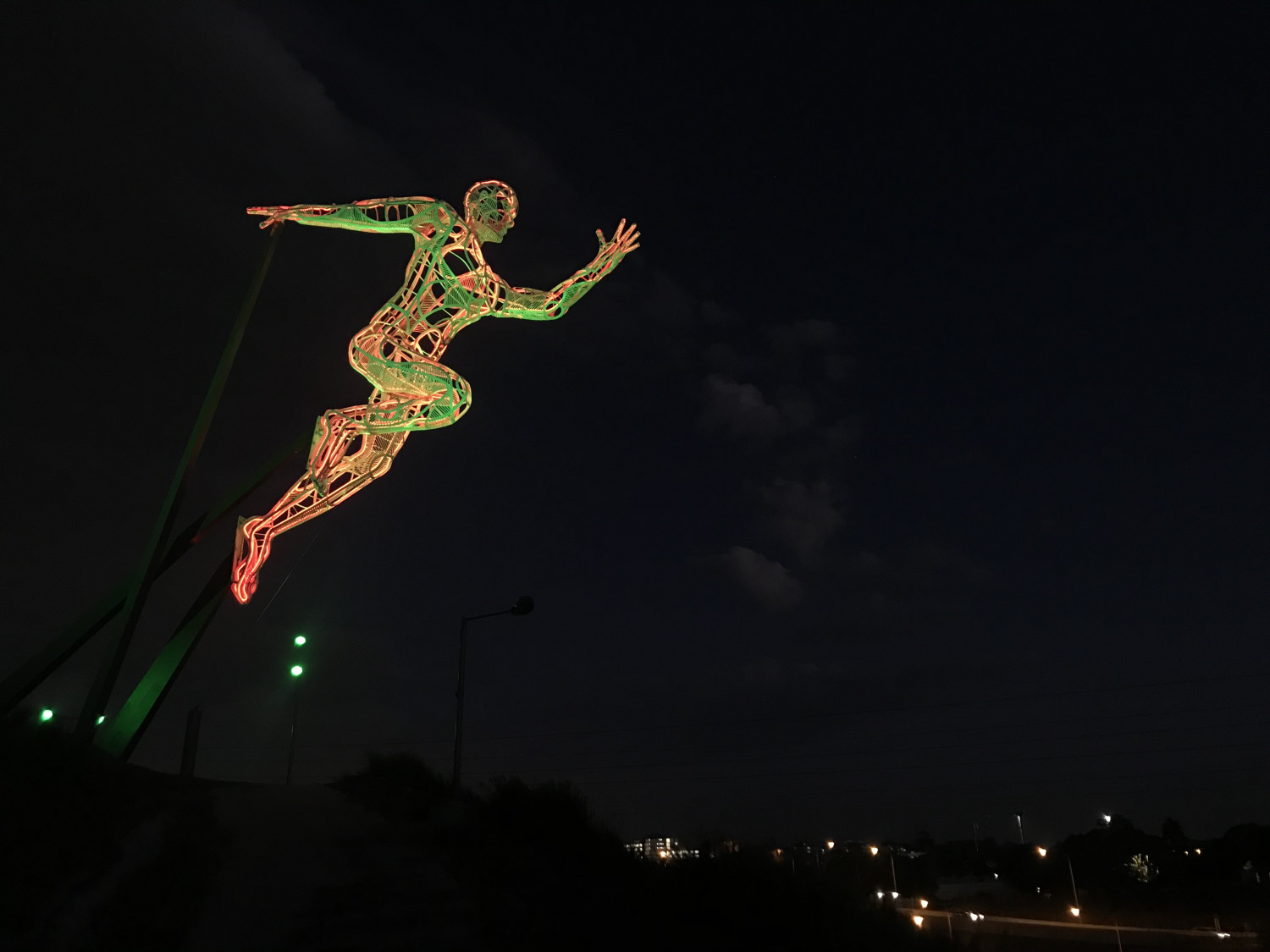 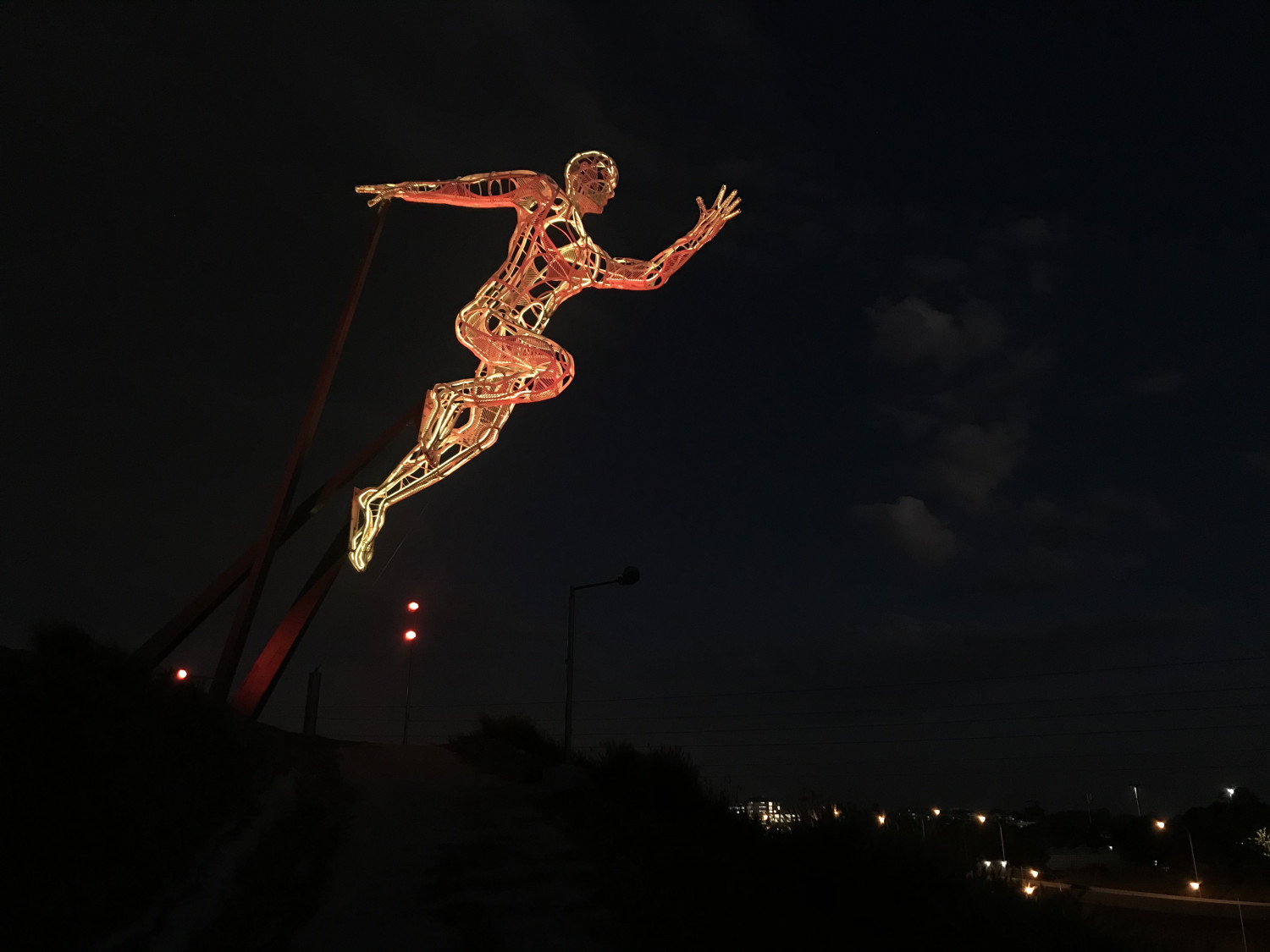 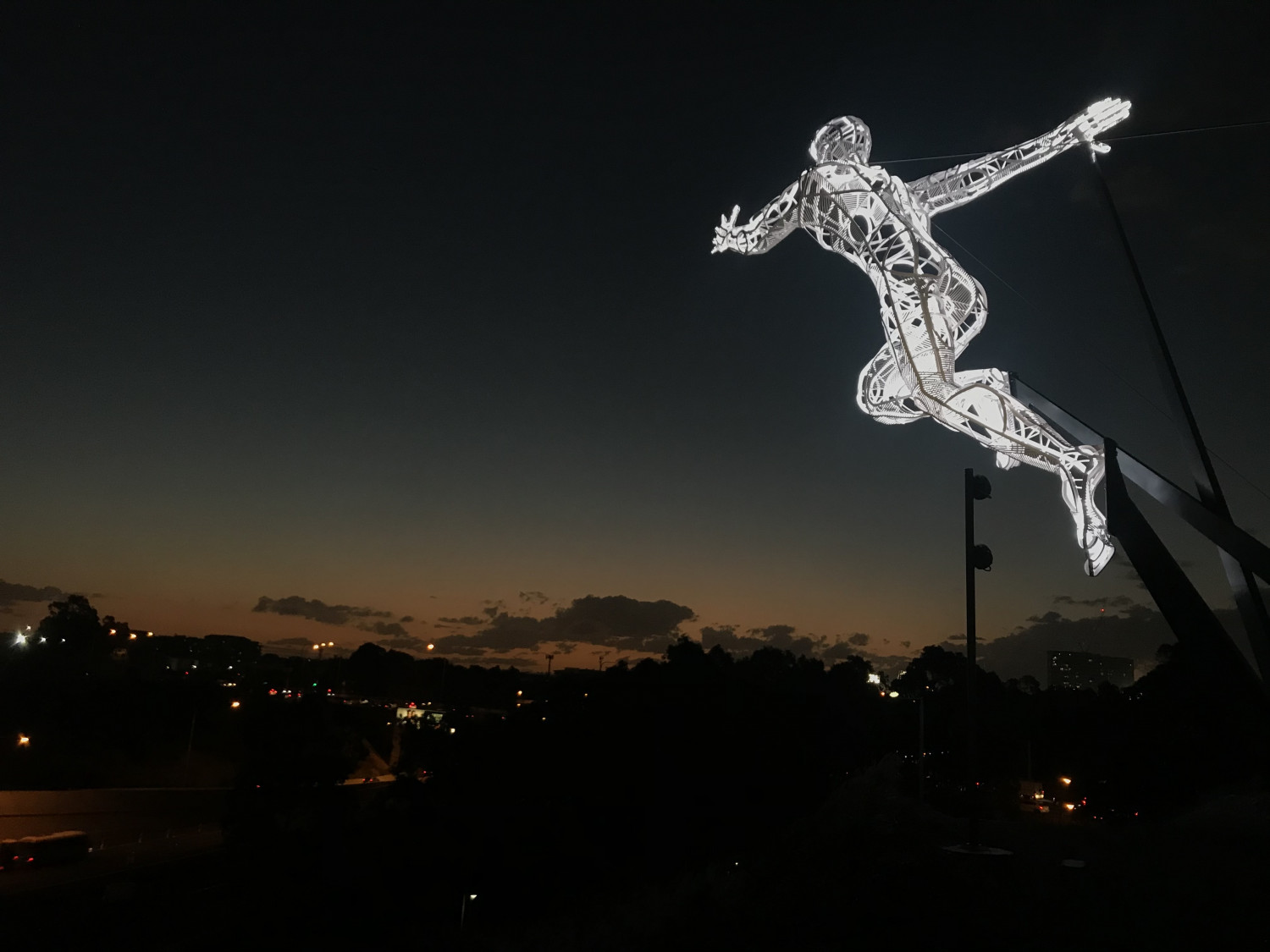 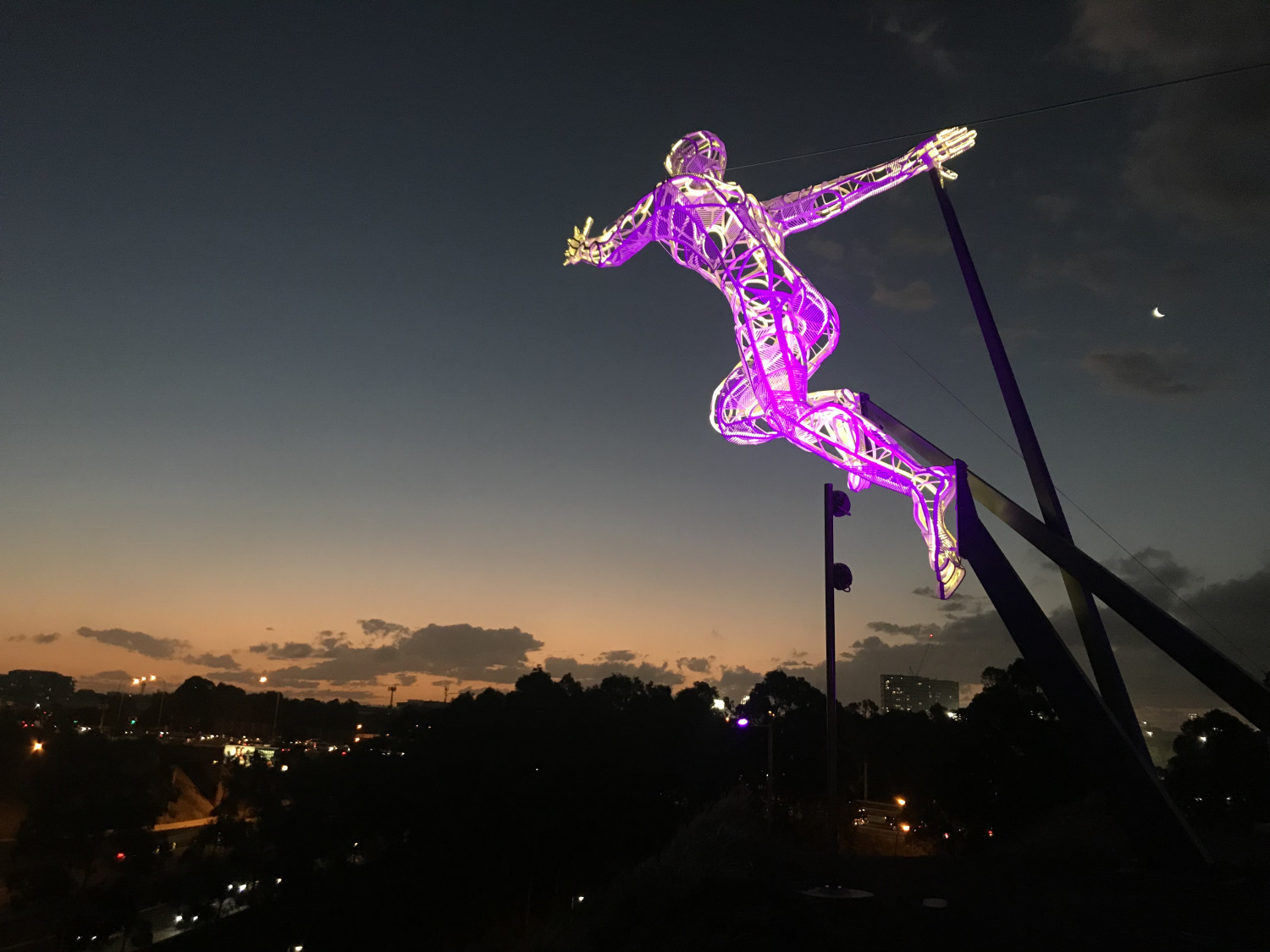 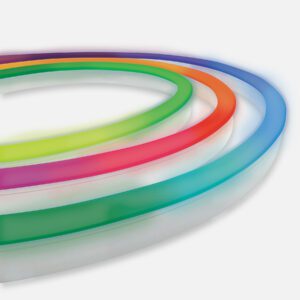